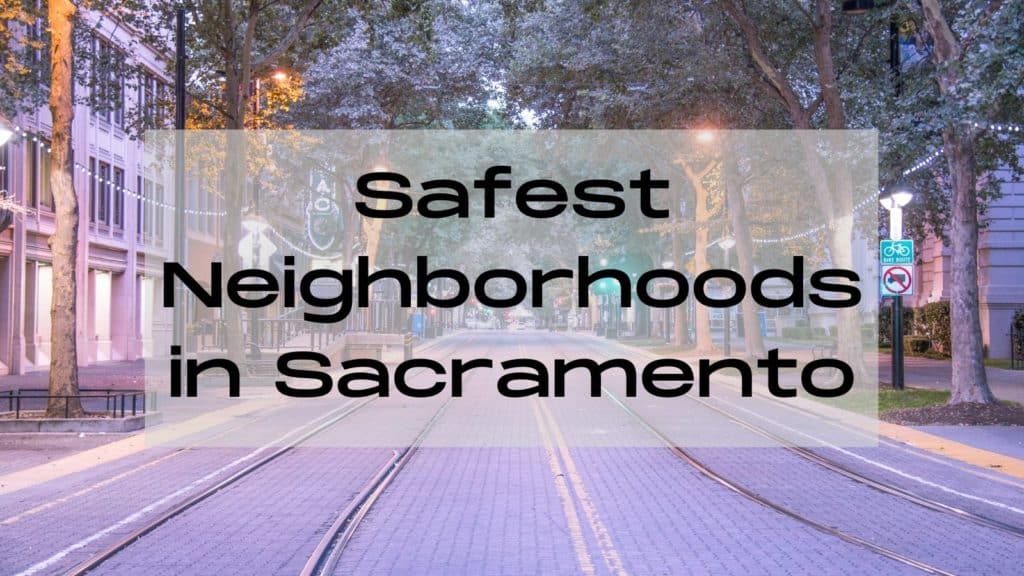 Here’s a look at the safest areas to live in Sacramento plus a guide to the most dangerous areas of Sacramento known for violent crime.

Is Sacramento a safe place to live? While the Sacramento crime rate is 53% above the national average, violent crime recently reached the lowest level in 35 years to 354 violent crimes per 100k people. As with many cities, most violent crime occurs in just a handful of areas. Areas with lots of traffic, amenities, and tourist attractions like downtown as well as areas with a thriving nightlife also have a higher crime rate. You can avoid most crime in Sacramento by choosing one of dozens of beautiful residential areas.

The City of Sacramento maintains updated crime statistics for Sacramento. In 2020, Sacramento had 44 murders (up 29% from 2019), 2,501 aggravated assaults (up 24%), and 2,511 motor vehicle thefts. Like many other cities, Sacramento experienced an increase in crime in 2020 due to the coronavirus pandemic.

In recent years, aggravated assault and robberies have plummeted in the Sacramento metro area. Property crime also reached the second-lowest level in 35 years.

Ready to explore the safest places to live in Sacramento? From family-friendly master-planned communities with low crime to riverfront communities and the vibrant downtown area, you don’t need to give up fun amenities to enjoy a safe place to live. Here are some of the top safe Sacramento neighborhoods to add to your list.

Once a botanical oasis, River Park was developed into a charming residential area known for its family-friendly amenities. Enjoy living right on the American River in a community of 1,700 households near Sacramento State University and downtown. You’ll be within walking distance of Glen Hall Park with a swimming pool, game fields, tennis courts, a playground, and access to Paradise Beach and the river.

While it’s located next to some of the areas of Sacramento with the highest violent crime, Natomas Park manages to be one of the safest areas in Sacramento! This gorgeous master-planned neighborhood offers a strong sense of community with plenty of neighborhood events like wine tastings and trivia nights.

Residents enjoy access to The Club at Natomas Park, a 15,000-square-foot resort facility with a fitness center, fitness classes, a resident lounge, two cafes, a kid zone with childcare, and three pools! Enjoy lap swimming, swim lessons, and aerobics classes. You’ll also be right next to the North Natomas Regional Park with a lake, dog park, amphitheater, and other great amenities.

It’s easy to see why Natomas Park is one of the best places to live in Sacramento for families who appreciate fun amenities, safety, and a laidback lifestyle.

Want to stay close to downtown Sacramento but enjoy outdoor amenities? Look no further than College/Glen, a fairly large neighborhood in Eastern Sacramento. The neighborhood makes it easy to reach downtown or Folsom via the Lincoln Highway and the light rail system.

While living in College/Glen, you’ll enjoy amazing outdoor attractions like Oki Park, Glenbrook Park, and Granite Regional Park with dog parks, game fields, and hiking trails. At the community’s College Greens Swim & Racquet Club, you can enjoy tennis, sand volleyball, and swimming. The neighborhood is also home to some of the best private and public schools in Sacramento.

One of the best parts about living downtown? Luxury apartment living with exciting amenities and the fun of downtown just steps from your front door.

Sometimes you need to sacrifice a bit of safety for the amenities and lifestyle you want. The crime rate in Hollywood Park puts it right in the middle of the pack of Sacramento’s neighborhoods, but it still has plenty to offer. Hollywood Park has been named recently as one of the hottest real estate markets in the U.S. thanks to its location near downtown Sacramento and tons of amenities.

A short 10-minute commute to downtown makes it a popular choice for young professionals while families and millennials can appreciate being right next to the Sacramento Zoo, the Cal Expo, and the Funderland Amusement Park. It’s also one of the more affordable areas on this list.

This unique gem of a neighborhood definitely deserves special attention, not just for its safety but its unique lifestyle. Nestled in a bend of the Sacramento River, Pocket is known for its high share of older adults: more than 55% of people living in Pocket, Sacramento are 40+ and one-third are retired. You’ll enjoy living near the Garcia Bend Park with convenient shopping at the Promenade Shopping Center.

The larger Pocket-Greenhaven neighborhood is a suburban oasis just south of downtown with scenic water views, 15 parks, and over 180 acres of open space. This master planned community designed in the 1960s is perfect for living a simple life with walks along the lake and few upscale restaurants and shops.

As you explore Sacramento crime statistics, you’ll find that a fairly small number of neighborhoods account for most violent crime in the city. Fortunately, it’s easy to avoid the bad areas of Sacramento you may want to strike off your list.

It includes North Natomas including neighborhoods like the Pell/Main Industrial Park, RP – Sports Complex, Village (5, 7, 12, and 14), and Metro Center. Police Beat 1A was identified as having a very high crime rate. This area includes RP – Sports Complex which had a 2019 crime rate of 9,338 crimes per 100k people. That’s 275% above the national average. Gardenland nearby has 214% more crime than Sacramento.

It includes areas like Hagginwood, Erickson Industrial Park, North Sacramento, and Parker Homes. Police Beat 2B was isolated as having the most crime. This area includes South Hagginwood, Willis Acres, Richardson Village, and Noralto. South Hagginwood alone has 1,842 violent crimes per 100k people – 386% above the national average.

This beat also includes Parker Homes, a small residential area of 250 people with a crime rate 659% higher than the Sacramento average! Del Paso Park nearby is the 2nd most dangerous neighborhood in Sacramento with 2,112 violent crimes per 100k people.

Police beat 3 includes downtown, Midtown, the River District, and Boulevard Park. Beat 3B has the highest rate of violent crime and includes Midtown, one of the most dangerous areas of Sacramento. Midtown is home to 6,500 people with 229% more crime than the Sacramento average. However, it’s also one of the most popular places to live in Sacramento thanks to its nightlife, gay bars, craft breweries, and restaurants.

This beat covers the airport, Sacramento City College, Gold Course Terrace, Pocket, and surrounding areas. Many of the safest neighborhoods in Sacramento are in this beat. Police Beat 4A had the highest rate of violent crime in the area and includes the neighborhoods of Land Park (home to the Sacramento Zoo), Upper Land Park (5th most dangerous area of Sacramento), and Curtis Park.

Downtown Sacramento is generally safe but some areas like Midtown have a high crime rate. Crime downtown is concentrated along certain streets and is related to theft or nightlife areas.

What parts of Sacramento should I avoid?

High crime areas of Sacramento include Del Paso Park and South Hagginwood in the north, Upper Land Park, and Midland in downtown. Note that visiting these areas is often safe as long as you’re aware of your surroundings.

Is it safe to live in Sacramento, California?

Despite a high crime rate, most Sacramento neighborhoods are safe. You can find dozens of beautiful, safe areas popular with families, young singles, and retirees.

Map of Safest Neighborhoods in Sacramento

Have you found a Sacramento neighborhood you’ll love to call home? When you’re ready to get started on your big move, call the trusted Sacramento movers at Mother Lode Van & Storage at 916-631-4285 for a free moving estimate!