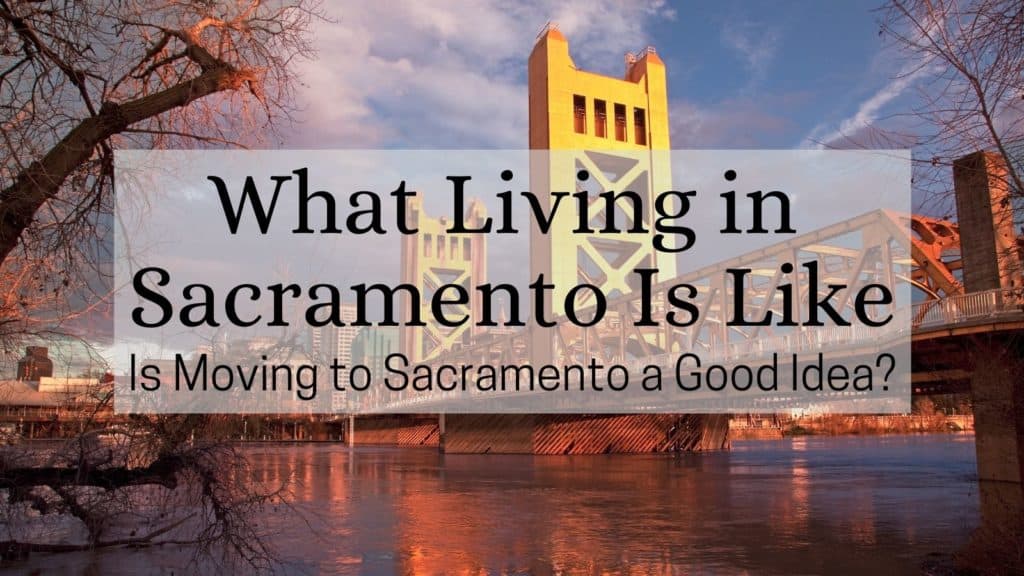 What Living in Sacramento Is Like | 🤷 Is Moving to Sacramento a Good Idea?

Located in Sacramento County, Sacramento is the capital of California and a cultural and healthcare center for the state. Sacramento may not get as much attention as San Diego, LA, and San Francisco, but it’s got a fun culture all its own and definitely beats other major California cities when it comes to affordable living. The city, located where the American and Sacramento rivers meet, boasts a diverse population, robust economy, and exciting nightlife that all make it one of the state’s fastest-growing cities.

What is Sacramento known for? It’s the Farm-to-Fork Capital of the U.S. with more than 40 farmers markets and a bounty of local, fresh food. It’s also known for its hipster culture and tree-lined downtown streets which have earned it the nickname City of Trees. Sacramento is also nicknamed the River City and there’s no shortage of ways to enjoy riverfront living including fishing, boating, and kayaking. 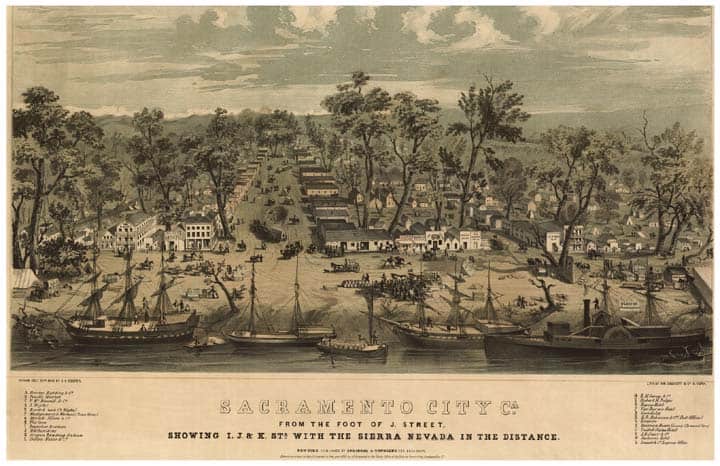 Sacramento’s history dates back to 1808 when Gabriel Moraga, a Spanish explorer, named the Sacramento River and Sacramento Valley, describing the air as “like champagne.” John Sutter Sr. arrived three decades later and, with a Mexican land grant, established Sutter’s Fort and a colony. The discovery of gold fueled rapid growth and Sacramento was incorporated in 1850. California’s statehood was ratified soon after and Sacramento became the capital. While Sacramento’s one-strong military bases and agricultural processing industry have declined and disappeared, the city has continued its strong growth and remains a vibrant community.

Are you ready to find out if living in Sacramento is right for you? Here’s what you have to look forward to after moving to Sacramento, CA.

Sacramento, located in Sacramento County, is the capital of California with a population of 513,600. The Sacramento metropolitan area, however, has a population of 2.5 million, the fifth largest in the state. Sacramento has been called the most hipster city and, according to a Harvard University Civil Rights Project study, America’s Most Diverse City.

It isn’t just a diverse city; it’s also well-integrated. This means there is a high level of racial and ethnic heterogeneity within Sacramento neighborhoods unlike many cities with ethnic and racial enclaves. This is attributed, in part, to innovative low-income programs and affordable housing for middle-class families. The Sacramento school district teaches over 53,000 students who speak over 70 languages, many of whom begin school without speaking English.

The racial and ethnic composition of Sacramento is:

Sacramento has one of the largest LGBTQ populations per capita, ranking 3rd in California and 7th among major cities in the U.S. 10% of Sacramento residents identify as gay, lesbian, or bisexual.

For every 100 adult females in the city, there are 92.2 males. The median age in Sacramento is 34.3, slightly younger than the U.S. average. The city has a population density of 5,258 people per square mile.

The foggiest months are December and January. When Sacramento gets tule fog on the ground, it can reduce visibility to under 100 feet and make driving dangerous. It may even last days or weeks.

Be prepared for very hot summers after moving to Sacramento. About 73 days a year, the high temperature exceeds 90°F. There are even two weeks a year with high temperatures over 100°F! From July through September, Sacramento is the sunniest place on earth with over 14 hours of sunshine daily.
The best time to visit Sacramento is April through June or September through November.

How to Get Around Sacramento

Sacramento is served by several freeways and highways including:

While living in Sacramento, you’ll benefit from a good public transportation system. Amtrak offers passenger rail service and its Sacramento station is the busiest in California. Amtrak California offers the Capital Corridor with service from Sacramento to suburbs in the Bay Area.

The city and the Sacramento suburbs are served by Sacramento Regional Transit District (SacRT), a robust light rail and bus system with 76 light rail vehicles and 274 buses. There are three light rail lines with 54 stations. A monthly SacRT pass is $100.

Sacramento is also served by Sacramento International Airport (SMF) which is dominated by Southwest Airlines.

Ahead of living in Sacramento, you’ll want to know how much you can expect to pay for housing and what you can get with your budget. The median home price in Sacramento is $400,000. While higher than the U.S. median, that’s a steal for California where the median home price hit $712,000 in 2020! The Sacramento housing market is extremely competitive with homes receiving multiple offers and going pending in just 5-8 days. You’ll pay around $265/square foot. Click here to see Sacramento, CA homes for sale and get an idea of what you should expect.

How much is average rent in Sacramento? After moving to Sacramento as a renter, you’ll pay $1,701 on average for an apartment. A one-bedroom apartment is $1,564 on average. These prices are down 6.8% over last year according to RentJungle. Average rents in Sacramento range from $1,100 to $2,250 depending on the neighborhood, however.

Best Sacramento Neighborhoods & Where to Live

Want to be close to the action? Located east of downtown, Midtown is a shopping and entertainment hub known for its gay bars, nightclubs, restaurants, and breweries. This exciting neighborhood in Sacramento always has something fun to do with music venues, vintage shops to explore, and historic charm. You can find Midtown, Sacramento homes for sale here with an average home price of $795,000.

The College/Glen area of Eastern Sacramento is a popular choice for commuters thanks to its easy access to Lincoln Highway and the light rail system. Along with easy access to downtown and Folsom, you’ll benefit from excellent parks, a swim club, and great private and public schools such as Cristo Rey High School.

Looking for safe neighborhoods in Sacramento where you can actually feel comfortable walking at night to restaurants and attractions? East Sacramento is the place to be. East Sac is right outside downtown and it’s one of Sacramento’s premier neighborhoods with excellent parks, a walkable layout, and tree-lined streets. There’s everything from restaurants and breweries to boutiques and coffee shops within walking distance. The highlight is McKinley Park with its rose garden and frequent events. Click here to see East Sacramento homes for sale with an average home price of $665,000.

Pocket is one of the most popular Sacramento neighborhoods for seniors thanks to its safety, quiet suburban atmosphere, and amenities. Over 55% of the population is at least 40 and about one-third of people in Pocket, Sacramento are retired. While home prices in Pocket are fairly high, you’ll be near the Promenade Shopping Center and the beautiful Garcia Bend Park.

Natomas Park isn’t just one of Sacramento’s most beautiful neighborhoods – it’s also one of the safest and most affordable. Known for its parks like the North Natomas Regional Park, you’ll enjoy easy access to dog parks, a lake, playgrounds, hiking trails and more. The neighborhood also features excellent schools like Inderkum High School and a community college. Check here for Natomas Park homes for sale with a median home price of $455,000.

How much does it cost to live in Sacramento? That’s probably one of your biggest questions as you consider moving to Sacramento. The Sacramento cost of living index is 117.9% which means Sacramento is 17.9% more expensive than the U.S. average.

By comparison, Orange County is 147.8%, Los Angeles is 145.9%, and San Francisco is a whopping 196.6%. That makes living in Sacramento more affordable than most metro areas of California!

Groceries are about 20% higher than average in Sacramento while transportation is 39% more expensive. Sacramento utilities are affordable at just 3% over the national average. The average monthly utility bill in Sacramento is $175.42.

Get an in-depth guide to the Sacramento cost of living here.

According to Numbeo, the typical family of four would have $3,598 in living expenses in Sacramento without rent per month.

A commonly overlooked expense that affects the cost of living in Sacramento is taxes. California is known for its high tax rates and Sacramento is no exception.

Sacramento is home to one of California’s largest economies with diverse business sectors. Sacramento is most known for its real estate and government industries, but it also has thriving agriculture, energy, health, and education sectors. 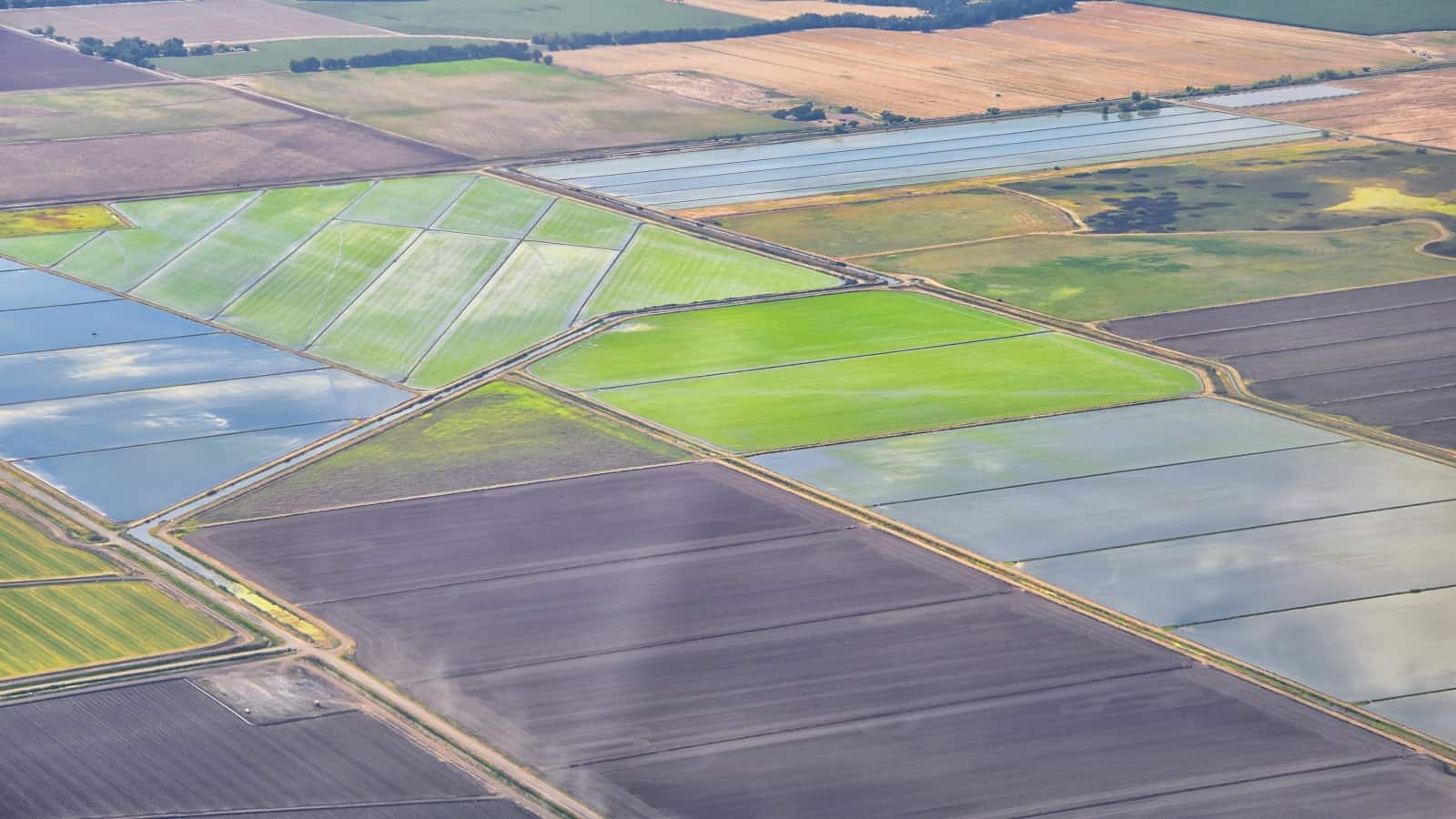 How much does it cost to live in Sacramento and what can you expect to earn? The average salary in Sacramento is $72,000 with an average hourly wage of $19.76 according to Payscale.

Here’s what you can expect to earn in common jobs:

Where are the best places to work in Sacramento? According to employee feedback on Glassdoor, top-rated employers include:

If you’re looking for a job before moving to Sacramento, try Indeed and the City of Sacramento job board.

Great Places to Eat in Sacramento

Sacramento is packed with amazing restaurants you’ll love to explore. From dim sum and French food to barbecue, Sacramento boasts a great food scene. Here are some of the best Sacramento restaurants to try.

This local Japanese chain delivers small plates and sushi. The Midtown location boasts a stylish location and it’s a must-try for lunch. You’ll love their award-winning sushi with an American twist!

Located in the Arden Fair shopping center, Seasons 52 is an upscale restaurant with seasonal American dishes and a large wine selection.

Tower Café is a must-try Sacramento restaurant. A favorite among locals, Tower Café is known for its eclectic menu with classic breakfast items like French toast plus everything from Spanish to Asian dishes.

Map of Things to Do in Sacramento

If you’re a big sports fan, you’ll probably want to know about options for enjoying sports after moving to Sacramento. The city has just one major league team, the Sacramento Kings (NBA), who play at Golden 1 Center. The Sacramento Republic FC soccer team plays at Papa Murphy’s Park and the Sacramento River Cats play baseball at the Sutter Health Park.

Despite the seemingly high crime rate, remember that where you live plays a big role in your safety. The most dangerous areas in Sacramento include:

You can use this Sacramento crime map from the city to compare crime rates by neighborhood. There are plenty of safe neighborhoods in Sacramento.

Sacramento is served by several public school districts. If you move to Sacramento south of the American River, you’ll probably be served by the Sacramento City Unified School District which has 15 high schools. The top-rated is West Campus High School, rated the #19 for all of California. Areas north of American River are served by:

Getting a Sacramento Driver’s License & Setting up Utilities

Once you’ve settled on relocating to Sacramento, you’ll want to get started setting up utilities in your new home and transferring your driver’s license to California. If you have an out-of-state driver’s license, you’ll need to complete the Driver’s License or Identification application and visit a Sacramento DMV office. You must pay the application fee and bring your Social Security number, proof of identity, proof of residency, and complete a vision test and knowledge test.

Is living in Sacramento in your future? It’s easy to see why so many people are moving to the City of Trees for high-quality and affordable California living! Give us a call at Mother Lode Van & Storage to get started with your free moving estimate today. 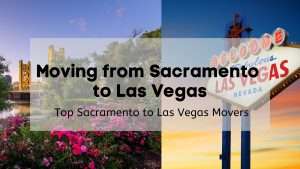 Have you lived in Sacramento, CA your whole life and decided you want to change it up? Has your job relocated you to Las Vegas, 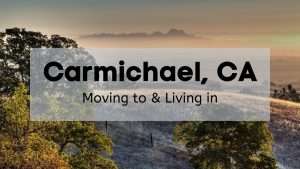 Carmichael, named for the Californian developer Daniel W. Carmichael, is a middle-class suburban census-designated place, neighbor to Sacramento and located in Sacramento county. Carmichael is 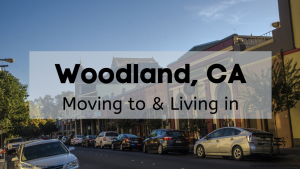 The City of Woodland provides residents a dense suburban feel with city and rural access. It’s nickname is the “City of Trees” and it is 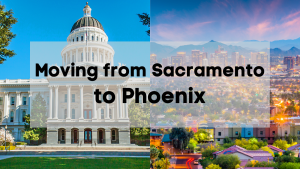 There are a wide variety of reasons you might decide to move from Sacramento to Phoenix, but here are the most common: a new job,