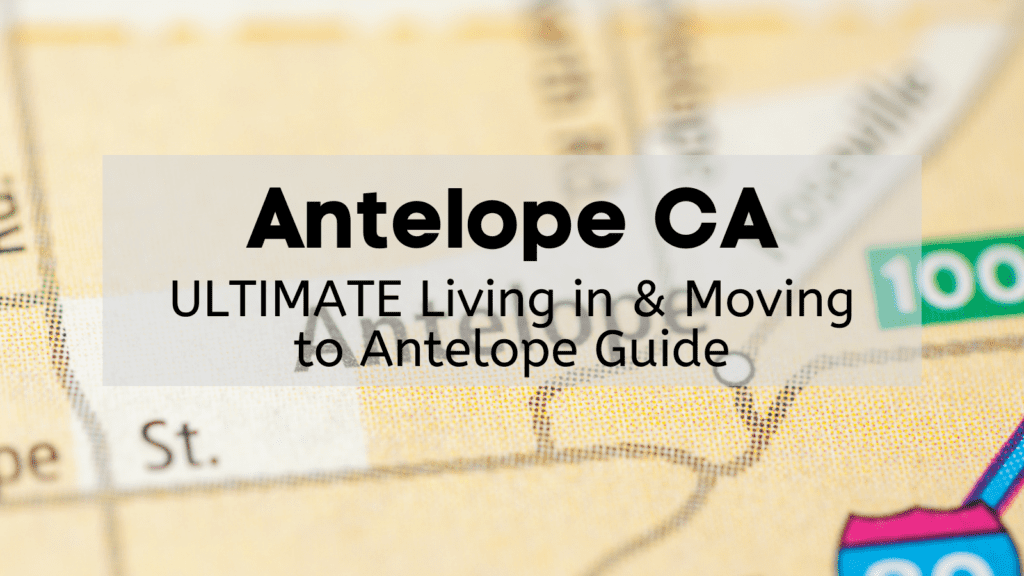 The census-designated place of Antelope, CA is a great community and suburb 15 miles northeast of downtown Sacramento and five miles southwest of Roseville. Its northern border is located directly on the line between Sacramento County and Placer County. These interesting borders were constructed at the same time that the town was named in 1993, when the town’s identity was established during a vote.

The city has a rich history stemming from the late 1800s when it was the only significant settlement in Center Township. In 1880, the city’s population was about 400 people, consisting mostly of railroad workers who eventually made the town their home. Eventually, the workers would leave the area and Antelope would become a small town with little business. On April 28, 1973, this small town – which consisted of a post office, general store, and several homes – was rocked when a rail car carrying aircraft bombs exploded in the southern region of the Southern Pacific’s Roseville Yard. The explosion rocked the town to its core, destroying most of the homes and the general store.

Today, Antelope is known for being a well-planned community composed of single-family homes and apartments. There is still a new feeling to the community, as most of the homes are newly constructed. Many people moving to Antelope and living in Antelope discover that there are many amenities that the town has to offer.

The population of Antelope CA is 48,398. Its population has seen a five percent increase from the most recent census in 2010. The median age is 32.9 years, putting it on the younger side.

Cost of Living in Antelope, CA

The homeownership rate in Antelope is 68.2% with a majority of residents buying rather than renting. Antelope, CA homes for sale make up a mildly competitive market, as most sell after being on the market for 10 days. The median price of an Antelope, CA home is $510,000. The average rent for an Antelope, CA apartment is $2,047, at an average size of 974 square feet.

Antelope Neighborhoods – Where to Live in Antelope

Where should you live in Antelope? With safe and comfortable options all over the city, a few of the best neighborhoods in Antelope include:

Antelope contains numerous parks and other fun outdoor activities at golf parks, open art studios, skate parks, pools, and more. These fun activities are maintained and watched over by the Sunrise Recreation and Park District.

If you’re on the lookout for convenient shopping in Antelope, the best shopping centers around are the Elverta Crossing Shopping Center, Elkhorn Plaza, the Westfield Galleria at Roseville, and Fountains at Roseville.

Antelope is 15 miles from Sacramento, and it is a quick 23-minute drive.

Things to Do in Antelope, CA

There are plenty of fun places, local points of interest, and interactive outdoor activities to explore in Antelope.

One location you can’t miss out on while in Antelope is the Antelope Community Park. This is fun for the entire family with great toys for the kids to play on. The park has lighted baseball and softball fields, a playground, and an aquatic complex with 3 pools. So you can imagine taking the entire family to swim, play baseball and have a day of fun.

For families who are looking for more outdoor activities, moving to Antelope provides many outdoor parks for people of all ages to enjoy. One of the most interactive parks is Lone Oak Park. This park offers residents many amenities, from beautiful walking trails to the best children’s play equipment to picnic tables for special orders events. Lone Oak Park comes with a baseball field, a volleyball court, six soccer fields, and a multipurpose field for the athletes who want to do it all. The park also contains space for fun activities like barbecues and children’s parties.

Grab a bite to eat at the best restaurants in Antelope with some great options like these two local spots.

One of Antelope’s top restaurants is Perko’s Cafe. Ok, it is a chain but it is a local one for the Sacramento metro and serves some of the best “American chow” in California. Dig into sandwiches, fried chicken sandwiches with grave,y and some of the best pancakes breakfasts you can ever find. They have been in business for over 40 years.

Among the top Mexican restaurants in Antelope, Jimboy’s won’t let you down. Traditional dishes such as tacos and burritos fill out this menu. They are very unique and take Mexican fast food to a new flair and height. Established in 1954, take the entire family.

The average salary in Antelope is $64,122. The city contains an unemployment rate of 7.4%, compared to the national average of 6%. Job growth in Antelope has been positive, with a 1.4% increase in jobs over the past year. Some of the occupations in Antelope with the top salaries include:

The total number of households in Antelope is 14,453, with 6,790 households having children. The area is served by the Center Joint Unified School District. There are 35% of Antelope residents whose highest educational attainment is a high school degree, 28% holding an associate degree, 17% holding a bachelor’s degree, and 5% holding a Graduate degree. For children under the age of 18, some of the best schools that Antelope has to offer are:

Antelope, CA is located at a latitude of 38,7082 and a longitude of 121.3299 in Sacramento County. The city has a total area of 6.84 square miles. The zip code for Antelope is 95843. The city also possesses area codes of 916 and 279. The city’s time zone is Pacific Standard Time (PST), but it shifts to Pacific Daylight Time (PDT) during daylight savings.

Explore more things to do, places to eat, and beyond with this Antelope, CA, map.

Tips for Moving to Antelope, CA

Have you been convinced that moving to Antelope, CA, is right for your family? If so, it’s time to find experienced movers like the top-rated Antelope movers at Mother Lode Moving. Call us today at 916-631-4285 or complete the Request a Quote form on this page for a free estimate.