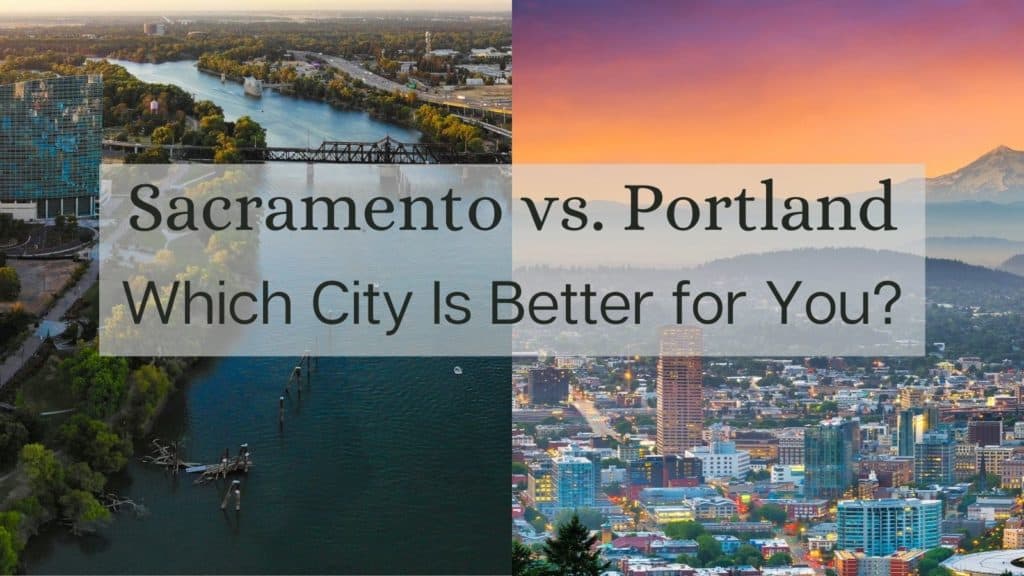 Sacramento vs. Portland 🤷 | Comparison, Pros & Cons: Which City Is Better for You?

Sacramento and Portland are two of the most livable mid-sized cities in the West, both offering a comfortable quality of life, great cultural attractions, and bustling downtowns. If you’re trying to decide between moving to Sacramento versus Portland, where do you start? This comprehensive guide to the pros and cons of Sacramento vs. Portland covers everything you want to know to compare living in the City of Trees versus the City of Roses.

Pros & Cons of Living in Sacramento vs. Portland

Which city is right for you: Portland with its unique character and culture or Sacramento with its affordability and ideal location? Here are some of the top Sacramento vs. Portland pros and cons to help you make your decision.

One of the best advantages of living in Sacramento is the city’s perfect location close to some of the best weekend destinations. You can drive to the ocean, wine country, and mountains in just a couple of hours. You’ll enjoy fun weekend getaways to destinations like:

Whenever you have a day or two free, you can just pack up the car and relax on the beaches of San Rafael or sip wine in the Sonoma Valley, both just over an hour away.

California is definitely notorious for its high cost of living and high home prices. While home prices in many California cities have pushed out potential buyers, this isn’t true in Sacramento. The average home price in Sacramento is $395,000 or $260 per square foot. When you compare Sacramento vs Portland housing prices, you’ll see Portland is more expensive with a median home price of $486,500. By comparison, San Francisco home prices have hit $1.4 million on average!

One of many great reasons to live in Sacramento? The city’s natural beauty and outdoor recreation. Go swimming, rafting, boating, kayaking, and fishing at one of several rivers running through the Sacramento area. American River Parkway is the jewel of Sacramento with more than a dozen parks along the water, but you’ll also find opportunities for fun along Sacramento River. Don’t overlook Folsom Lake just 25 miles easy, the perfect spot for boating and water sports.

A post shared by AmericanRiverParkwayFoundation (@arpfsac) on Oct 27, 2020 at 4:25pm PDT

The Sacramento Jobs Market Can Be Limited

Sacramento is the capital of California with an economy driven by government services. About 1 out of every 5 workers in Sacramento works for the federal, state, county, or city government. However, health care and education also play a big role in the economy of Sacramento. While this may be a drawback to living in Sacramento, it’s not a strength if you’re looking for a government, medical, or educational career with top employers like Sutter Health, UC Davis Health, Kaiser Permanente, and Dignity Health/Catholic Healthcare West.

Taxes Are High in Sacramento

Choosing between California and Oregon? Don’t overlook taxes, a big downside of living in Sacramento. California has one of the highest tax rates in the country with income taxes of up to 12.3%. You’ll also pay a combined sales tax rate of 7.5% living in Sacramento. If you look at taxes in Portland vs. Sacramento, you’ll see a huge upside of living in Portland: no sales tax! Oregon income tax is also very high, however, at 5% to 9.9%, but not as high as California.

One of the perks of living in Portland? The city’s great public transit system. Portland offers 5 light rail lines, 3 streetcar lines, and one commuter line. When you compare Sacramento and Portland, you’ll see Sacramento only has two light rail lines with no commuter rails serving suburbs or streetcars. While there is a light rail line planned for Sacramento International Airport, it will only happen if funding materializes.

The Outdoors Is a Way of Life

In Portland, enjoying the outdoors is a way of life. You’ll meet tons of outdoorsy people who live for adventure on the weekend, whether it’s bonfires and camping or backpacking trips. You’ll find plenty to do outdoors within just a short drive, too. Within 30 minutes, you’ll find waterfalls, mountains, and rocky coasts.

The Marquam Trail is just three miles from downtown, a huge plus side of living in Portland. Explore the forest and climb 650 feet in elevation to Council Crest Park which offers views of downtown and Mt. Rainier. The nearby Hoyt Arboretum features thousands of species of trees with spots for bird watching or you can try Springwater on the Willamette, a paved 3-mile path along the Willamette River.

Lots of Rain in Portland

Even if you like rain, the amount of rain you experience in Portland may be a bit much, it’s a disadvantage. The weather is definitely a minus of living in Portland for some people. You’ll have anywhere from 4 to 19 rainy days every month and up to 25 cloudy days every month.

Portland Has a Major Homeless Problem

Portland has arguably the worst homeless problem in the United States. Alleys in the city are covered with used needles and garbage. In 2015, 3,800 people were on the streets, temporary housing, and shelters with 12,000 doubled up. In 2016, a shantytown along Springwater Corridor, a popular hiking trail, stretched 2 miles with 200 tents and 500 homeless people, the largest homeless encampment in the U.S. In 2018, Portland had more than 14,000 chronically homeless people with no real solutions from officials on how to solve the problem. This is certainly a drawback to living in Portland you should consider.

Cost of Living in Sacramento vs. Portland

Which city is more expensive, Sacramento or Portland? When deciding where to move, cost of living plays a big role. You may be surprised to learn the cities are actually very close in terms of cost, but the cost of living in Portland is a bit higher than the Sacramento cost of living.

According to Numbeo, you would need $5,208 in Portland for the same quality of living you would get with $5,100 in Sacramento. Here’s how it breaks down:

Additional Things to Consider Between Sacramento Versus Portland

Sports in Sacramento Versus Portland

Love fall and the changing seasons? A plus side of living in Sacramento is it’s one of the few areas in California where you can see the leaves change colors with beautiful ginkgo and maple trees in the area.

Sacramento Versus Portland: Where Are You Moving?

For decades, Portland has been known for its progressive values that have made it a center of counterculture. It’s also one of the greenest cities in the U.S. with one of the country’s most vibrant music scenes. Sacramento, on the other hand, offers a California lifestyle with affordable housing and an amazing location close to everything California has to offer. Which city is calling to you?