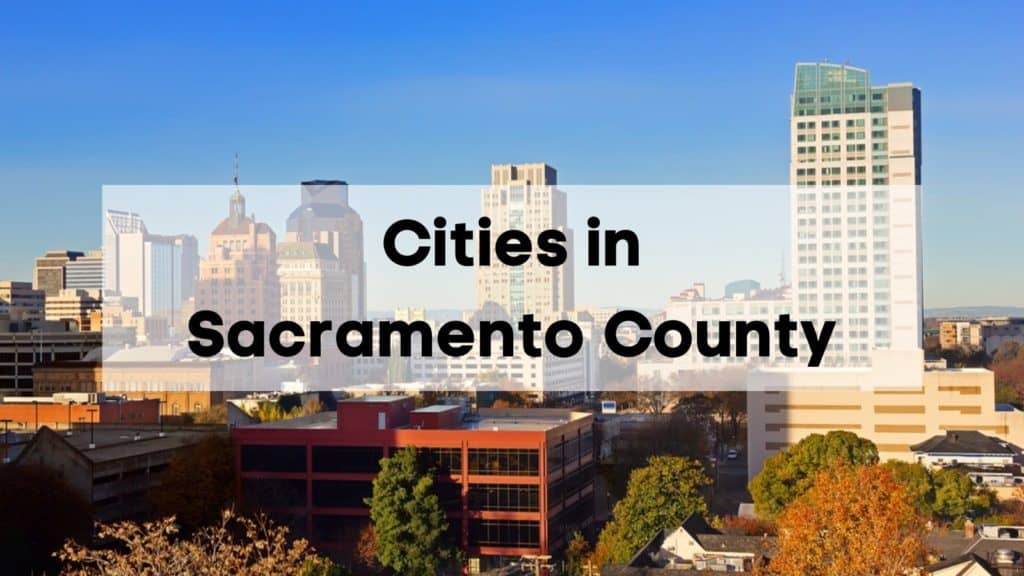 Sacramento County is the 8th largest county in California and also ranks among the top 25 largest in the United States. The area played a big part in the California Gold Rush of the 1840s and boasts an exciting history because of its origins. Since then, cities in Sacramento County have attracted many people because of their beauty and unique backgrounds.

The name “Sacramento” comes from the Spanish word for sacrament or the Lord’s Supper.

Pulling information from the US Census, you’ll be able to learn key facts about Sacramento County cities as well as exciting things to do, local amenities, and other helpful details.

By getting an overview of cities in Sacramento County, you’ll be able to understand the significant differences between the areas found on this list.

If you’re considering relocating to the area, learning about Sacramento County cities will be the best way to determine which of these communities is best for your lifestyle.

The beautiful city of Sacramento is located 87 miles northeast of downtown San Francisco along the western border of Sacramento County. It was established in 1854 and serves as the county seat.

Sacramento is the largest city in Sacramento County by population with 500,930 residents. Its evolving contemporary culture has become inviting to people from all walks of life. 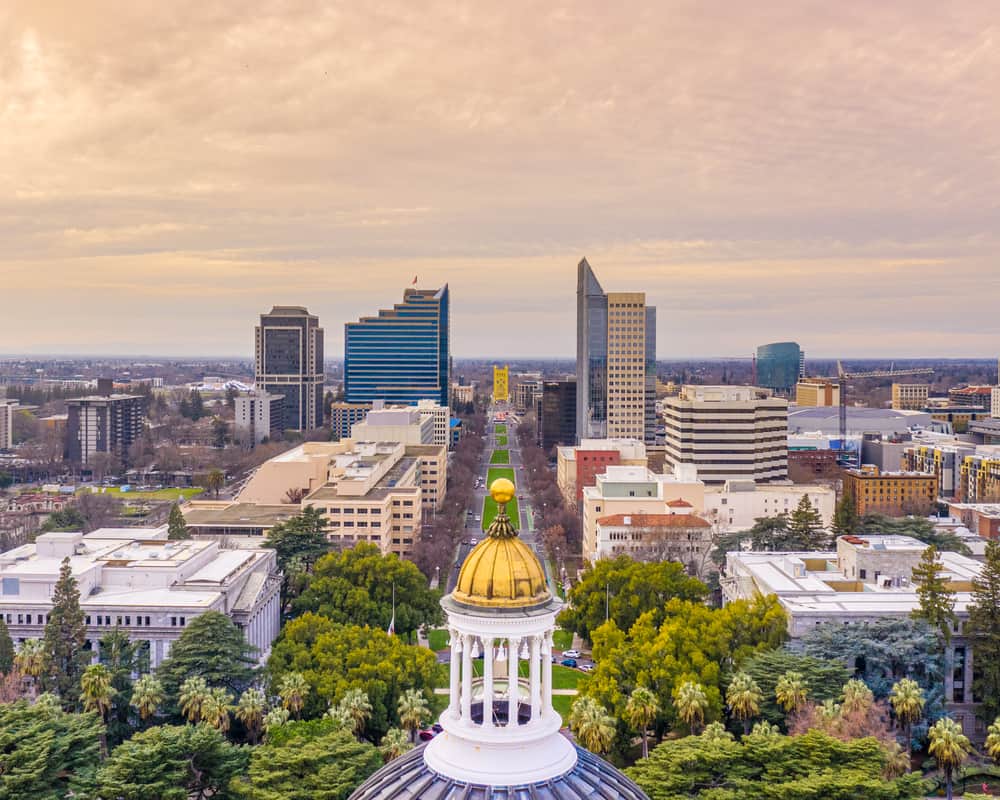 Residents living in Sacramento love what the city has to offer and the lifestyle they enjoy there.

West Campus High School and Natomas Pacific Pathways Prep are two of the top schools in Sacramento. The area also hosts ​​California State University-Sacramento, which is the city’s most highly ranked college.

Elk Grove was founded in 1850 and is next on the list of cities in Sacramento County. It is located about 15 miles south of downtown Sacramento, making it a convenient place to live.

Two of the best things to do in Elk Grove are Rockin’ Jump and the Elk Grove Regional Park. 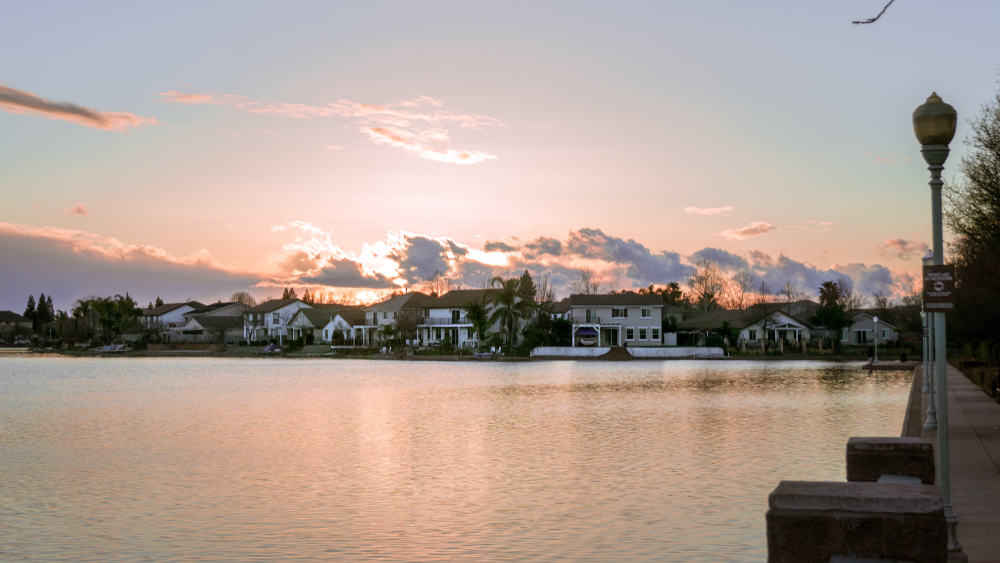 There is a wide range of cultural diversity in Elk Grove as the city’s population consists of 36% Caucasian, 28% Asian, 18% Hispanic or Latino, and 11% Black or African American.

The growing census-designated place of Arden-Arcade was established in 1916 and can be found about 8 miles east of downtown Sacramento.

Arden-Arcade is known for being a shopping paradise with over 2,000 businesses in the area and popular malls like Arden Fair, Arden Square Shopping Center, and Arden Creek Town Center.

Other fun activities in Arden-Arcade include the local Howe Community Park and Enchambered: Sacramento Escape Room. 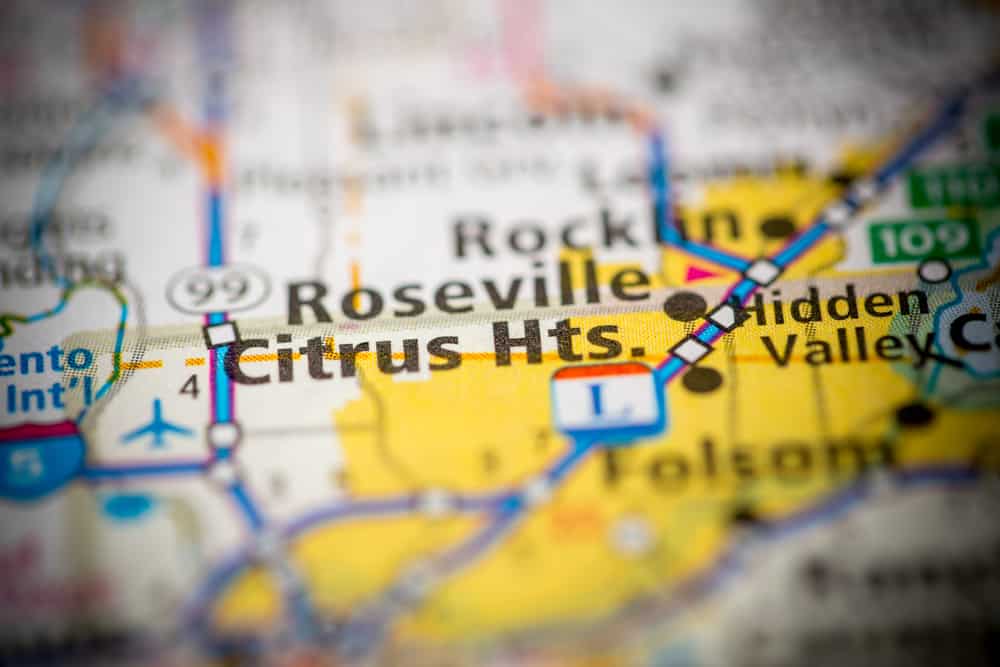 Citrus Heights is known for its many local parks and outdoor attractions such as the Arcade Creek Park Preserve and Tempo Park.

The dense suburban culture in Citrus Heights brings with it lots of local coffee shops and nice local neighborhoods for young families.

People residing in Folsom enjoy living in one of the safest Sacramento County cities. The community was founded in 1946 and is about 23 miles northeast of Sacramento.

Best known for the song “Folsom Prison Blues” by Johnny Cash, Folsom is also recognized as a popular place for outdoor activities at the Folsom Lake State Recreation Area as well as the local SeaQuest aquarium.

Folsom is the most affluent location on this list of cities in Sacramento County with a median household income of $114,405 per year.

There are plenty of safe communities in Folsom, which are home to working professionals.

Looking at a map of Sacramento County cities, you’d find Rancho Cordova to the east of Arden-Arcade. The area was established in July 2003 and has grown quickly with more people moving to Rancho Cordova each year.

The area now known as Rancho Cordova has a unique history that played a significant role in the Gold Rush. It has many historical landmarks and offers beautiful weather for most of the year. 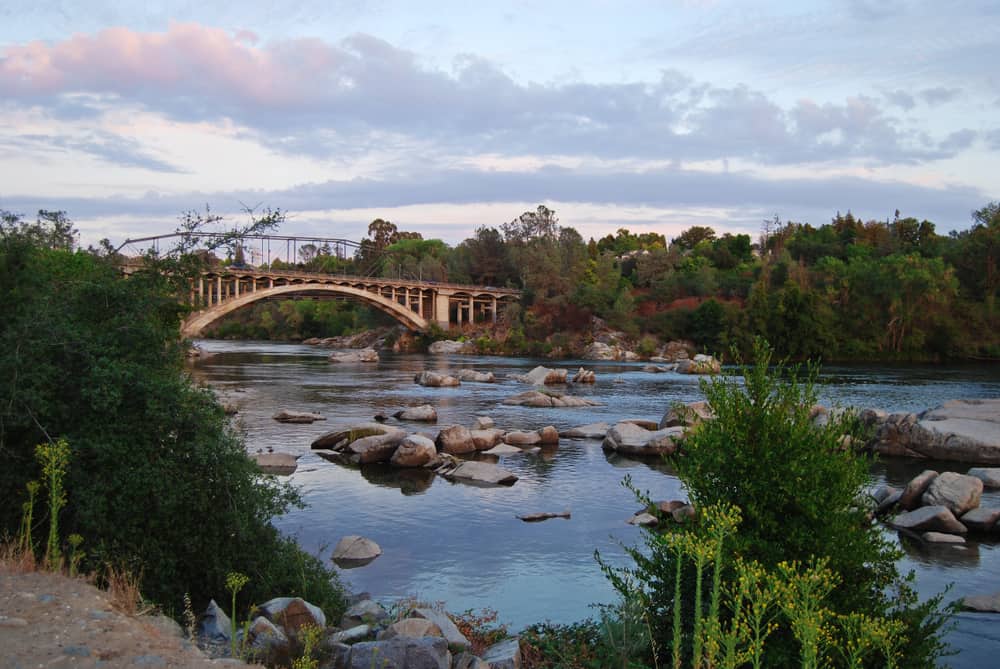 Rancho Cordova is a culturally diverse city with a variety of ethnic histories and people from all different backgrounds.

Two of the best places to visit in Rancho Cordova are Red Door Escape Room and Wacky Tacky.

The census-designated place of Carmichael, CA is often considered one of the best suburbs of Sacramento County. It was named after community founder Dan Carmichael, who first established the area in the year 1895.

Back in the early 1900s, advertisements were sent to neighboring communities offering people 10-acre tracts in Carmichael for only $1,500. The median home price for properties in Carmichael is now around $380,200.

Located between Arden-Arcade and Rancho Cordova, the best activities in Carmichael are the Effie Yeaw Nature Center and the local Carmichael Park.

Located to the southeast of Sacramento, the small area of Florin is a census-designated place in Sacramento County. It was founded in 1875 and has been steadily growing ever since.

Florin is commonly known for its production and distribution of strawberries, which are grown locally around town. It also has a strong Japanese influence due to the many immigrants who have made their way to this area from Japan over the years. 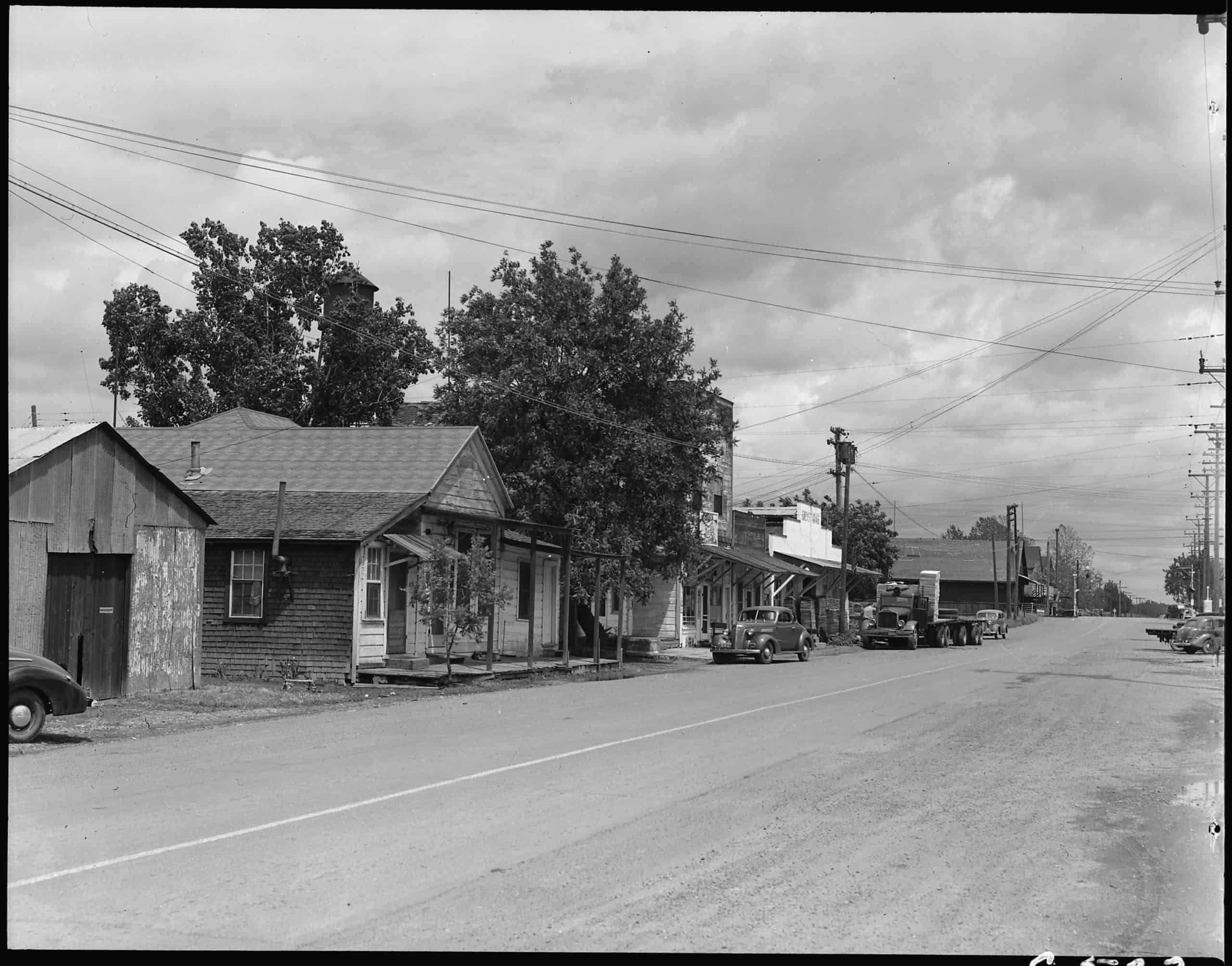 Many fun outdoor activities are located in and around Florin including locations like William Land Regional Park and Florin Reservoir Park.

The census-designated place of Antelope, CA is located to the west of Citrus Heights and was established in the late 1980s.

Antelope is known for being a local planned community that developed slowly at first and then saw quick growth in later years. The area consists of mostly residential homes with a couple of small commercial areas mixed in.

Located about 12 miles northeast of downtown, the census-designated place of North Islands is one of the largest suburbs of Sacramento. It is a popular community to live in and stands as one of the top Sacramento County cities among its residents.

North Highlands is known for being a housing development with a few commercial locations scattered throughout the area. It is located next to the former McClellan Air Force Base, which has since closed down and is now called McClellan Business Park.

The top-rated things to do in North Highlands are Strizek Park and The Gun Range.

Here is a complete list of cities in Sacramento County, sorted first by population, then other metrics from the US Census. Education Level is the % of the population that has finished high school. The Population Growth is from 2010 to 2019. If they exist, under Type, we have included cities, towns, villages, census designated places and more.

Map of Cities in Sacramento County

How many cities are there in Sacramento County?

There are 7 incorporated cities in Sacramento County along with 16 towns and census-designated places.

What is the most populous city in Sacramento County?

Sacramento is the largest city in Sacramento County with a population of 500,930 people.

How many people live in Sacramento County?

The population in Sacramento County is 1,552,058 residents.

Which of Sacramento County’s Cities is Right for You?

If you’re ready to choose any of these cities in Sacramento County as your new home, we have a team ready to help you out! The crew of trusted movers at Mother Lode Van & Storage is standing by to handle every aspect of your transition to this area. Give us a call today at (916) 631-4285 or take a moment to complete the Request a Quote form above for a free moving estimate!

Please confirm deletion. There is no undo!