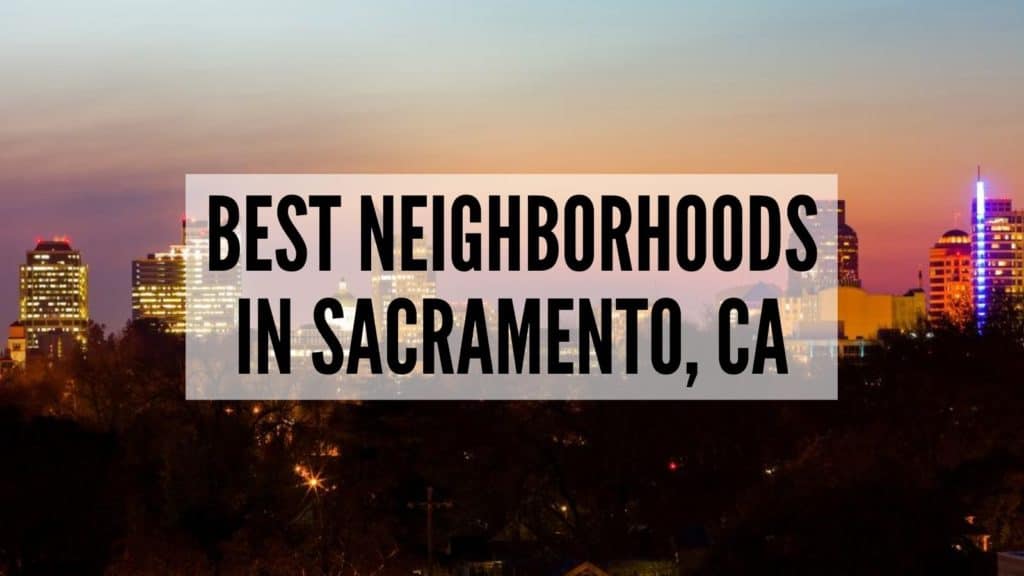 The city of Sacramento, CA is known by many nicknames including the City of Trees, the Big Tomato, and the Camellia Capital of the World. But most locals lovingly call it Sac or Sactown. With a Sacramento population of about 484,530 residents, it is currently the sixth-largest city in California.

Known for being one of the most diverse cities in the United States, the population is made up of about 31% Caucasian, 19% Asian, 13% Hispanic or Latino, 13% Black or African American, 2% Pacific Islander, and 1% Native American.

Along with its diverse culture and fun things to do, Sacramento is also a great place to live. If you’re wondering where to live in Sacramento, you’ll want to learn more about the top neighborhoods in Sacramento to see which part of town will be right for you.

This humble community found on the south side of town is the most populated neighborhood in Sacramento. With many apartment complexes and smaller homes, Parkway is mostly residential apart from a handful of small business offices. It is also the location of a few nearby schools including Luther Burbank High.

Residents love this Sacramento community for its low home prices and convenient places to shop close by. Residents have plenty of options available at the Southgate Plaza with shops that include 99 Ranch Market, Goodwill, FoodMaxx, 99 Cents Only, and more.

2. Westlake | The Wealthiest Neighborhood in Sacramento

On the northwest side of the city, the small Sacramento community of Westlake is an affluent housing development surrounding its own manmade lake. The neighborhood is next to a variety of enjoyable outdoor activities with destinations such as Westlake Community Park, Sparrow Park, and Egret Park right around the corner. It is home to Natomas Pacific Pathways Prep High School, which has one of the top-ranked education programs in the city.

Westlake is the closest neighborhood on this list to Sacramento International Airport, which is only about 6 miles away. The area also has its own Westlake Shopping Center on the southeast corner, complete with a Walgreens, Chase Bank, a nail salon, and the Natomas Chamber of Commerce. Residents love that they are located right next to the beautiful North Natomas Regional Park.

Toward the southcentral edge of Sacramento, Meadowview is located close to the Parkway neighborhood. This family-friendly neighborhood is most well-known for its many local schools including John Bidwell Elementary, Edward Kemble Elementary, Susan B. Anthony Elementary, Rosa Parks Middle School, and John H. Still Middle School. It also has easy access to West Campus High School, which is the number one ranked high school in the Sacramento metropolitan area.

At the community’s Delta Shores shopping center, you’ll find great shops like Ulta Beauty, DICK’s Sporting Goods, Hobby Lobby, and Ross. There are also plenty of great places to eat such as Pieology Pizzeria and the Habit Burger Grill.

More than 55% of the local population in Pocket is over the age of 40 years old with about 35% of the community’s residents being retired. The main benefit of living in this area is the quiet, calm atmosphere its tenants enjoy. On the southwestern border of town, this comfortable Sacramento neighborhood is called Pocket due to its shape and placement along the Sacramento River.

There are many apartment complexes in the area providing newcomers plenty of choices when it comes to places to live. Residents have quick access to nearby amenities such as Garcia Bend Park and Frank Seymour Park. And most people in Pocket do their shopping at the nearby Promenade Shopping Center.

5. North Highlands | One of the Biggest Suburbs in Sacramento

You’ll find North Highlands on the northeastern edge of the city as it is one of the largest neighborhoods in Sacramento geographically, spanning about 9 square miles. Located next to the Sacramento McClellan Airport, locals have all the local conveniences they need including Walmart, Target, The Home Depot, and plenty more.

Fun things to do around the North Highlands community are visiting the Aerospace Museum of California, the Gibson Ranch Regional Park, and the Powerhouse Science Center

Only about 2.5 miles south of downtown Sacramento, Land Park is the second-richest neighborhood in the city. It is home to a variety of lifestyles ranging from young families to retirees, making it a welcome option for anyone. It has local schools that including primary options like Crocker Riverside Elementary, along with the secondary education found at Sacramento City College.

Home to the Sacramento Zoo and Funderland Park, residents living in this beloved Sacramento neighborhood get to experience some of the top things to do in the city. They also get easy access to other fun Sacramento activities at the Old Sacramento Waterfront District and the California State Capitol Museum.

7. Boulevard Park | Considered One of the Best Places to Live in Sacramento

Adjacent to downtown Sacramento, the small and close-knit community of Boulevard Park is widely recognized as a highly desirable neighborhood. A big part of its appeal is due to the many popular amenities found nearby including top-rated local restaurants like Mikuni, Lucca, Tres Hermanas, and The WaterBoy.

With some of the most expensive homes in Sacramento, Boulevard Park occasionally has property listings well over $2 or $3 million. Newcomers will get to enjoy outdoor activities at places like Sutter’s Fort State Historic Park and James Marshall Park.

East Sacramento, as you might have guessed, is located about 3 miles east of downtown. It is one of the most walkable neighborhoods in Sacramento that you’ll find on this list, making it a nice community for cyclists and runners. The remarkably low crime rate in East Sacramento makes this area one of the safest places around town.

If you’re thinking about relocating to Sacramento and are interested in this area, properties range from small two-bedroom homes for around $455,000 up to multi-million dollar mansions. Schools in this community include Phoebe A. Hurst Elementary and the reputable California State University, Sacramento.

East Sacramento is also the location of UC Davis Medical Center, which is ranked among the top 50 hospitals in the United States.

Pick the Best Sacramento Neighborhood for You

No matter which neighborhood in Sacramento you choose, you’re sure to love living in this wonderful city. With its many perks and amazing California climate, a happy lifestyle isn’t far away.

Once you’ve taken your pick from the top Sacramento communities, the team here at Mother Lode Van & Storage would love to help with your relocation. Our experienced Sacramento movers are highly-trained experts that will make your transition a breeze. Give us a call today at (916) 631-4285 or complete the Request a Quote form above for a free Sacramento moving estimate!